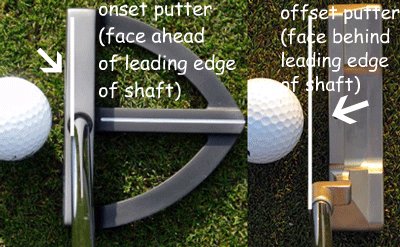 Offset putters are those where the top edge of the putter is behind (i.e. further away from the target than) the leading edge of the shaft.

Almost all putters produced today are offset putters. because most people putt better with an offset putter. This is because it encourages the hands to lead the head through the stroke and when this happens, off-center hits twist the face less.

Over time, putter manufacturers have realised that handicap and professional players putt better with an offset putter and that's why onset putters (which for some people are easier to align) are actually quite hard to find.

Why offset putters will help your putting

However, I did say you'll "most likely putt better" with offset putters! It's not an exact science. If you're one of the few people who find an onset putter easier to align at the target (there are a few in every thousand), then this would make that style of putter the more sensible choice for you. For more information on onset putters, click here.

The Anser style putter - the most common offset putter style

Ping's Anser putter design is by far the most common style of offset putter. Copied a thousand times by other manufacturers, it remains the most popular and successful putter design, despite being first produced by Ping in 1966. Take a look at our Anser-style putter reviews here.

One problem with offset putters

The only issue I have found from my experience of using dozens of different offset putters is alignment. If the hosel obscures your view of a significant part of the leading edge at the heel end, then you lose a significant visual aid to correct aiming. Manufacturers have worked extensively to give other alignment aids, such as long lines on the back of the putter or the Odyssey 2-ball design.

The main effect this covering of the heel of the leading edge can have is a tendency to close the putter face as you instinctively bring the toe end of the putter into line with the front of the hosel, which aims the putter left.

However, visual perception of putter aiming is a highly individual thing and you will have to experiment with different models to see what works for you.

The Tuttle is certainly original - a putter that definitely looks like a driver. The good news is that it performs better than it looks!

A minimalist anser head that looks just a little lightweight. The roll is pure and the feel is good.

Most similar to a Ping Zing shape, this putter has a simple no-frills look, a good roll, but a high price tag.

Face balanced version of the Method 001. Favor this putter if you're trying to produce a straight-back-straight through stroke.

Face balanced mallet which looks like it's got a good bit of meat behind the head. For our money the best looking in the Method range.

This putter seems to stay square for ever! Feel's not great, but you'll love it if you use a square-to-square stroke

Perhaps Odyssey's best effort yet to eclipse the Scotty Cameron and Ping Ansers.

Sharp edged star ship of a putter - you need to like futuristic shapes to use this one!

The design which has won more pro events than any other, now with top quality materials.

A much more attractive version of the original without the copper head that oxidizes in the sun!

In our opinion, Ping's best effort at a blade putter

Technology has led the Ping designers to create a holy mess of a putter. If you love the weird and the wacky, you might (just) like this

A surprising remake of the classic bullseye flange shape. More forgiving and more immediate with feedback than the original

A simply gorgeous reworking of the Bullseye shape. New materials and great Scotty Cameron workmanship make this a beautiful putter to look at. Still not that forgiving, though!

A Bullseye putter worthy of consideration! The offset neck and flange aren't quite what you'd want if you're a purist looking for a bullseye, but it putts better.

A nice re-working of the classic FGP from Seemore. Unfortunately only available with an offset shaft that doesn't make full use of the wonderful riflescope aiming system

In our view the classiest Yes putter - anser-style head with the amazing C-Groove for a terrific roll.