Why choose a Tommy Armour putter? They don't have high profile advertising campaigns like the major putter companies such as Ping, Odyssey and TaylorMade, so it's easy to miss this well established brand with a long heritage of putter making and affordable prices.

Who was Tommy Armour?

You may well recognise the name Tommy Armour. The 3-time major champion with a total of 25 PGA TOUR victories under his belt is one of the most recognisable names in the World Golf Hall of Fame. The equipment company bearing his name was well known up to the 1990s for their "Silver Scot" irons, but you see a Tommy Armour putter less often.

The first Tommy Armour designs were released several decades ago, and they are actually some of the most legendary in the game. They are often known only by the four letters that appear in bold print on the putter head - ZAAP.

and Amazon listings for a Tommy Armour Putter in your region

Do any tour players use a Tommy Armour Putter? 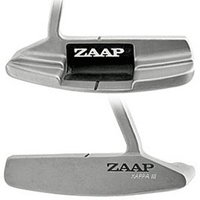 These ZAAP putters were used by tour players all around the world, indeed some were into the 2010s, but the brand has become a far rarer sight in the current climate where players receive multi-million dollar sponsorship deals from golf manufacturers.

They are best known as face-balanced putters that help you to keep the face of the putter from closing (rotating to the left if you're a right hander) through impact.

There were many ZAAP head designs from blades to mallets.

In more recent years Tommy Armour putters have taken a more modern turn and you'll find that they are a great option if you're trying to buy a new putter on a budget.

The modern designs come in many different lines, including the EVO line and the 845 line.


Are the Tommy Armour insert models any good?

Most of the current models feature a milled face insert so you'll notice a soft, forgiving feel when the ball comes off the putter. There are also belly putter options if you're looking to experiment with longer lengths.

Most importantly the range comes at budget prices, so you won't have to break the bank to give a decent insert putter a try.

You'll find that all the new lines of Tommy Armour putters feature modern styling including excellent alignment aids and anti-glare finishes which also contribute to your feeling of confidence and comfort over the ball.

Almost every putter in the Tommy Armour range is face balanced, meaning that the face of the putter will remain parallel to the ground when balanced by the shaft.

This technology is designed to help players who miss putts to the left of the hole, and face balanced putters are often favoured by players with straight-back straight-through strokes as opposed to those who move the putter on an arc.

The elastomer face insert found in most modern Tommy Armour putters will give you a soft feel at impact, but also help the ball gain top spin and start rolling quickly.

Where can you get hold of a Tommy Armour?

You'll find Tommy Armour golf products sold in more than 30 countries across the globe, although stockists are somewhat few and far between. You might be best off buying a putter like this online.

and Amazon listings for a Tommy Armour Putter in your region

Not sure whether a Tommy Armour putter is right you? Click here for our guide to choosing the right putter for your stroke.