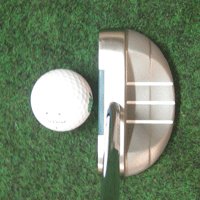 I have to confess that Fisher putters is a brand that I hadn't heard of until a salesman at my local golf superstore tried to sell me one. "Not a chance," said I "that I'd trade my Odyssey for a no-name brand". While I did indeed stick to my opinion after trying one I was impressed with these little-known putters. Then, when researched them a little further, I was amazed at what I found out...

I didn't know for example about the patents the company holds in relation to putter inserts putters which other major companies like Odyssey and Taylormade have to pay licence fees to Fisher to emulate. In fact, there are 9 individual patents relating to insert technology that Dr. Dale Fisher, the company's founder, holds.

How much does all this matter when you've got a Fisher putter in your hands, though? Let's find out...

listings for a Fisher putter in your region


How do Fisher putters look behind the ball?

The look of the CTS range is fairly traditional - they've got a Ping Anser shape (the CTS-1), two Ping Zing look-a-likes (the CTS-2 and CTS-4), a Ping B60 shape (the CTS-8) and several D-Shaped models.

They all look like they're made with pretty solid materials and are in no way offensive to the eye.

The insert is somewhat unusual insofar as it occupies the entire space between the top and bottom of the putter face and therefore is clearly visible at the top of the putter when you address the ball.

This frames the ball rather nicely and gives you a very good guide as to whether you are addressing the ball in the middle of the sweetspot - striking the ball here is one of the keys to putting (a central aimline, by the way, is no guarantee of this - quite often golfers fail to position the ball correctly when they only have an aimline to guide them).

I do have to say that the look of the putters is a bit more clunky than top class brands. The hosels in particular seemed a bit less sleek and styled, but you have to bear in mind that a Fisher cost a bit less than these brands, and I'd rather they saved money on the hosel than the face of the putter!

How do they feel?

The inserts in these putters certainly feel soft.

They are a patented rubber polymer that is claimed by the manufacturers to reduce deflection off line from the shape of the dimples as the face of the putter makes contact with the ball.

How do they roll the ball?

The roll I got from the Fisher putter range was, sadly, not all that convincing. I felt that there was some inconsistency in the way the ball rolled and this had an effect on the dispersal of the balls around the hole.

I would have to be sure that I was going to get a better roll than this if I were going to switch from a more recognised brand of putter to a Fisher.

Innovative and soft face inserts are definitely the strength of Fisher putters, but the slightly workmanlike looks and inconsistency of roll would not make me rush to buy one of these putters.

It strikes me that if other more recognised companies are using almost all the Fisher technology under licence, then why not buy one of these other brands?

Maybe a Fisher costs you less in the shop, but would it lose you more on the course?

Not sure if a Fisher putter is for you? Click here for our article on choosing a putter to fit your stroke.