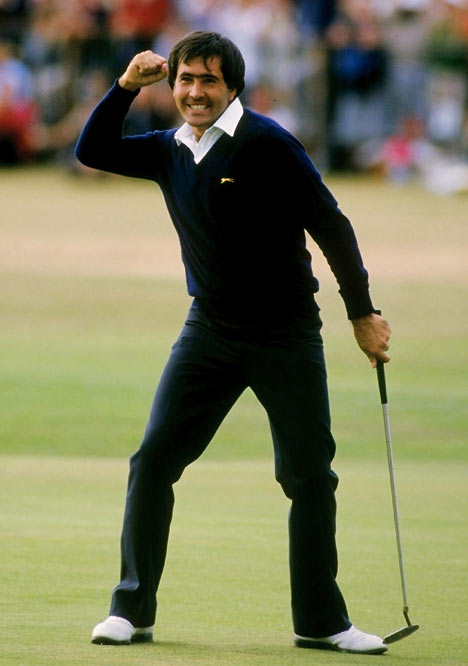 Seve Ballesteros' putter for the great majority of his career was a cast Ping Anser. Thanks to Seve and so many players using this putter, the Anser has become what most people think of as the "standard" putter with its distinct heel and toe weighted design.

The Anser is now no longer covered by patent, so any company can make an anser style putter, however Seve used a number of other putters later in his career with varying degrees of success.

Seve used the Anser to win over 50 tournaments worldwide and all of his 5 majors. He still has the record for the highest number of gold putters in the legendary Ping Gold Putter vault where one gold putter is placed for each tournament won with a Ping putter.

and Amazon listings for a Ping Anser in your region

Seve winning the 1979 British Open with his trusty Ping
In the latter part of Seve's career, he tried a range of putters, namely a Tad Moore, a rubber faced STX putter and even something called a PLOP, but none was a successful as his trusty Ping.

Consisitent throughout Seve's career was his preference for lighter putters: the head weight was lighter (between 295 and 325 grams) than today's standard (around 350 grams).

Seve Ballesteros' putter always had the original black Ping grip with the customary logo down the top no matter what make it was!

Seve was never one to tinker too much with his equipment, so you never saw a drastic heap of lead tape on the back of the head or anything of the sort. To Seve, putting was an art form and you attempted to roll the ball into the hole whatever state your equipment was in.

Seve did not shy away from using his putter when he wasn't on the green either. Former European Tour player and Sky Sports commentator Tony Johnstone recalled a tournament in which Seve extracted himself from under the lip of a fairway bunker by using the toe of his putter and taking a full swing, putting the ball to a foot from the hole and setting up an eagle three.

And just when you thought that was just about as good as it gets, that's not the only unorthodox shenanigans that he got up to with his Ping putter. Check this out:
Seve's Putting Technique: Seve had an unorthodox setup, well stooped over the ball, but beyond that his technique was right from the textbook. His backswing and follow through worked just like a pendulum and although he looked relaxed and had a swift, punchy rhythm, at no time did his left wrist break down (a very common flaw for the novice golfer).

The other interesting thing to note about Seve's technique was how far forward the ball was in his stance and how the stroke he used had its center well forward as well. His stroke was a pendulum with its centre at the bottom of his left ribcage.

More important even than his technique was the sheer force of will Seve put into his putting. The intensity of his mental approach was second to none and the putting green was the place it really showed. One only needs to see his open-winning fifteen foot putt at St. Andrews in 1984 to appreciate just how much it is possible to want a ball to drop.

It has been said that Seve actually adjusted the face of his putter to help promote opposite sidespin and thus reduce the break on short putts. This is not something modern putting teachers advocate, but it does have some advantages. Not only does this enable you to take a more direct line to the hole, but the ball will also start to break later and therefore have more chance of going in. Why not give it a try?