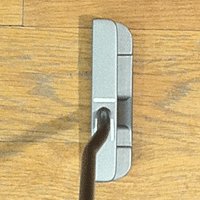 The Seemore FGPw is one of the second generation Seemore putters which has an altered design from the original Seemore black head to make a more classy-looking metallic grey putter. You won't see many more (excuse the pun - I couldn't resist it) changes than that on this model. The head looks pretty much like the original Seemores just in a different colour.

Overall the appearance is of a high quality piece of kit.

The one major concern we have about the FGPw is the bent shaft (Seemore call this the Whistle shaft). If you look carefully at the picture here you'll see what I mean. The whole idea of the "riflescope" red dot design is that you turn the putter until the two lines on top of the putter head frame the bottom of the shaft and the red dot in between disappears entirely behind the shaft. That works perfectly with a straight shaft, but not when the shaft has a bend in it at just above the point where you're supposed to be lining up.

listings for Seemore putters in your region

Have a close look at the picture and see whether you could say for sure whether the shaft is precisely framed by the white lines... I honestly can't.

Indeed this goes for all the Seemore Putters which don't have the original straight shaft that Seemore used when if first launched the riflescope design, and which Payne Stewart and Zach Johnson used to win Seemore's first two major championship - the 1999 US Open and 2007 Masters respectively.

The feel off the face of the Seemore FGPw is very solid, you feel like you've got a chunky bit of meat behind the ball, there's no doubt about it. This is probably due to the large amount of weight in the clubhead positioned just behind the ball.

I think you'd be hard pressed to claim that the feel from this putter is as refined as what you get from the classical milled steel heads like a Ping Redwood or Scotty Cameron or anywhere near as soft as from an insert putter like an Odyssey.

The feel you get is a little bit tinny and you get a slight ringing sound from the head when you make contact, but I personally quite like it - it's in no way offensive.

... and if you feel the riflescope aiming system helps you line up better that'll help your game far more than a slightly softer feel.


How does the Seemore FGPW roll the ball?

The roll you get from the Seemore is surprisingly good, given that the company's main focus of design is the aligning system. I found the roll to be very decent. You'd be able to use this on fast greens with no problem at all. I suppose very grainy or slow greens might show up the putter's roll a little bit, but for summer golf this would be a great putter, roll-wise.

We at Best-Putter.com love the riflescope aiming system. It has the potential to correct one of the biggest issues in your putting game, so it's really worth a look. Although the Seemore FGPw is a perfectly good in terms of feel and roll, we strongly recommend you to look at the straight shafted models if you want to get the best out of the aiming system.