The Ghost Putter Series, launched in 2010, signalled the arrival of TaylorMade as a serious brand to be reckoned with in putting, and no longer "just" the most biggest name in drivers and fairway woods.

We at Best-Putter.com were sceptical at first about whether TaylorMade could compete with the biggest names in putting: Odyssey, Scotty Cameron and Ping but we were genuinely surprised.

The highly-recognizable white-headed ghost putters give you as good a roll as any of the top name milled or groove faced putters, and have simple, clean designs that we also really rate. The bright color, contrasting with the green surface means they're super easy to align and have very nice feel and feedback.

Not in the US? Click here for eBay and Amazon listings for a Ghost putter in your region

Jason Day, Justin Rose, Sean O'Hair and Paula Creamer are amongst the bigger name players who have used a Ghost Putter on the professional tours.

Click on the links or images below to read our independent, hands on reviews (inactive links are for putters which are pending review. Check back soon!)

Other Details about the Ghost putter range:

* Putting teacher to the pros, and double Major winner, Dave Stockton, was involved in the concept and design of the Ghost series.

* Justin Rose won his first WGC event, the 2012 Cadillac Championship with a Ghost Corza. It was his second win in 6 months with the putter, having won the BMW Championship in September 2011.

* TaylorMade Putters aren't as well known as their drivers and fairway woods, but they do have some experience of producing putters at the highest level. The TPA putter range which Nick Faldo won three of his six Majors was originally marketed and produced by TaylorMade. However, largely due to its association with him, Wilson purchased the rights to the putters from TaylorMade around 1990. 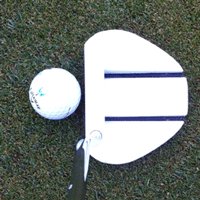 Not sure if a Ghost Putter is for you? Click here to read our article on how to find precisely the right putter for your stroke.