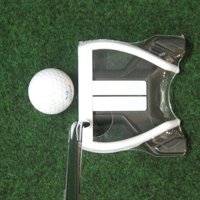 The Taylormade Daddy Long Legs is one of the first two "counterbalanced" putters Taylormade produced. This means that a heavy weight is inserted into the grip end of the putter giving the head more momentum to pivot around the point at which you hold the grip.

Taylormade's marketing blurb launched this putter as a revolutionary alternative to the belly putter, but it is not entirely new... clubfitters have added weights to the butt end of putters for some time.

What is new is the longer grip and markings to encourage you to grip lower down, which accentuates the effect, which in combination with the spider head gave this putter the highest MOI (moment of initia) of any putter manufactured.

How does it look behind the ball? The Taylormade Daddy Long Legs certainly has a large, distinctive look when you address the ball. The back of the putter is very much like the Spider putter designs that came out a few years before.

Needless to say, the look of the Daddy Long Legs would probably offend you if you're a purist, but I'd stop short of calling it ugly ... how about "interesting"?

For my money, there's one distinct improvement over the Spider designs - the long white bar in the center of the putter head which serves as a background to the alignment line. This has the effect of allows the line to stand out dramatically, making aiming the putter much more straightforward.

Compared with most putters, the Daddy Long Legs feels heavy, this is probably due to the large head and weighting under the grip.

I have heard reports from players who use them that the putter can be a little clumsy at first, so you would probably want to think very carefully and try one out for a couple of rounds before buying it if you regularly putt on lightning fast greens.

The counterbalancing does appear to give the putter some momentum of its own, guiding the head on an arc. Because the head is face-balanced the path the counterbalance creates will be a slight arc. Therefore this putter is probably not for you if you are truly attempting to swing the putter on an absolutely straight-back-straight-through line with the face square to the hole throughout.

How does the Taylormade Daddy Long Legs roll the ball?

This is where this putter scores highly - the roll you get from the putter is true and consistent.

If you can handle the looks, then this is a good putter if you're coming away from a belly putter and want to keep the feeling of the putter swinging somewhat on its own.

My reservations are that on very fast downhill putts this putter could be a bit heavy-handed, so try it out for some time before deciding whether or not to buy.

Not sure if a Taylormade Daddy Long Legs is for you? Click here for our article on choosing a putter to fit your stroke.