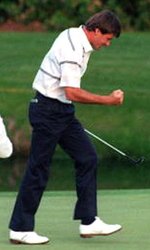 Nick Faldo was a great pressure putter. Whether it was at the British Open, Masters or Ryder Cup, during the late 1980s and 1990s no pro holed more putts than him when it really mattered.

Faldo almost certainly became a great putter through his meticulous practice regime. His philosophy is that there's no substitute for hard work and as a result he practiced until his hands bled in his junior days at Welwyn Garden City Golf Club.

The best thing to take from him, then, would be how he used that time on the practice green so productively, leading him to the ability to hole out in any pressure situation: Like many tour pros today, Faldo devoted most of his practice time to short putts - from six feet and in, not only to increase confidence, but also to be more prepared for that sort of length of putt when getting up and down.

and Amazon listings for a Ping B60 putter like Nick Faldo's

What can we learn from Nick Faldo's putting?

Putting a chalk line down on a straight putt on the practice green from this distance is the first thing to do for any golfer looking to work on their putting.

What makes Nick's set-up a model for students of the game is keeping everything square and facing the target. He himself has spoken on the subject of making sure everything is in line: "One of the most important things when putting is keeping the shoulders parallel at address," he said.

Naturally, it makes sense that a player setting up to the ball with their shoulders open is more likely to take the putter outside on the way back and cut across the ball on the way through, and vice versa.

What you can learn from Nick Faldo's putting

Faldo's putting stroke is a simple straight back and through action that is replicated over an over in an almost robotic fashion. No matter how long the putt, the tempo never changes - only the length of the stroke. The way in which he achieves such a constant rhythm is by counting. Counting "1…2" in your head will immediately help you develop your own putting tempo as well as maintain it. Swinging the shoulders monthly at this pace creates the pendulum motion so closely associated with putting.

Faldo also applies the approach that every putt is "straight." What he means is that the aim point (i.e. where you want the ball to start) is the only part that is relevant.

From there, it is gravity alone that makes the putt break. A good exercise to ingrain this idea is the popular tee peg and string drill. Find a putt that breaks a little - two or three inches will suffice. Then place one tee peg at the same distance to the side of the hole.

The second tee peg is put to the side of where you are hitting the putt from. Tie the string to the two points, making a straight line along where the ball is intended to start. In this way, the focus is drawn away from the hole itself and where the ball needs to be sent.

Here's a video of Nick demonstrating the drill himself:

Enjoy this page? Please pay it forward. Here's how...

Would you prefer to share this page with others by linking to it?