Yes Putters are the result of the collaboration between English putting teacher and putter designer Harold Swash and Yes Golf, a Denver-based manufacturer. 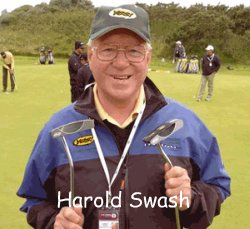 UK-based Harold was a wonderful human being and a genius putting teacher who has worked with dozens of the world's top golfers including, recently, Padraig Harrington. Phil Kenyon, formerly his apprentice has made a massive name for himself coaching major champions including Henrik Stenson, Francesco Mollinari and Gary Woodland.

The whole of the Yes range feature Swash's patented C-Groove technology, which, is said to decrease the distance off the putter face that the ball skips and bounces before it starts rolling purely, "end over end".

The feel you get from a putter with the C Groove (and only Yes have the right to manufacture putters with this groove on them) is very soft, almost like a glancing blow.

This is because the C-grooves (C shaped grooves) which are cut into the putter face are row upon row of slanted edges which are tilted down towards the ground. The sound off the putter face is quieter than you would imagine.

The scientific research (all carried out by Yes - it should be noted) tells us that that the roll the C-Groove give you is technologically superior to all their competitors. I have to say that this is also the impression you get when you use one - the ball rolls extremely true.

It also seems to roll further than you expect which is always a sign of a well-struck putt. Sounds great, right?

Absolutely, except for the fact that until recently Yes Putter designs have been ugggggly! The first Yes Putters looked like they were made by a communist architect who'd just discovered golf! They're all squared edges and sharp angles - not things of great beauty...

Almost the entire range is face-balanced as well. So unless you are working on the extremely difficult (if not frankly impossible) straight-back-and-through-stroke until recently there was not a single putter in their range which would suit you.

However, in their most recent range, Yes Putters have responded to feedback from touring professionals who (surprise, surprise) requested toe-weighted designs, and in more traditional styles.

So there is now a traditional blade-style design (the "Morgan") and Ping Anser style designs (The "Abbey", "Dawn", "Callie" and "Tracy" designs). All are a good deal better looking than the clunky mallets and nasty futuristic designs that first carried the wonderful C-Groove.

The C-Groove technology really did have something to it. The impression of a truer roll which is claimed by the company certainly appears to show through in our tests.

Look at the more recently released putters if you want a combination of the C-Groove roll and something that doesn't make you physically sick to look at.

Yes C-Groove Putters were only produced between 2000 and 2012, but they sold in the millions, so there is a fair stock of used putters to be found. Most of these will be the older, less appealing designs that I mentioned above, so unless you definitely want to have nasty looking face-balanced putter, you'll have to look carefully.

Players who use / have used Yes C-Groove Putters include: 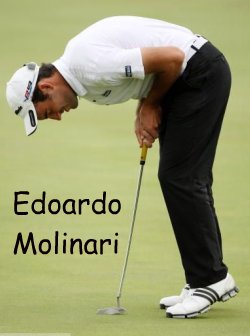 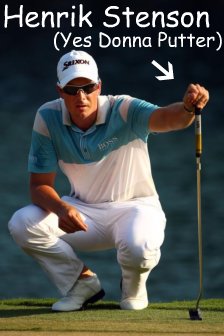 In our view the classiest Yes putter - anser-style head with the amazing C-Groove for a terrific roll.

Straightforward D shaped mallet with C-Groove roll. Very pleasing to the eye, but feels hard and a little dead

Sadly a hideous futuristic design, but at least it has an aim-bar behind hitting surface to help you align