Seve Ballesteros - a genius on the green 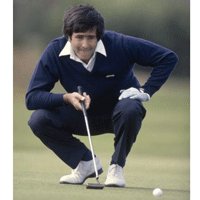 Seve Ballesteros' legend as a truly great putter lay within both the technique he used and the incredible feel with which he applied it.

Seve belonged to the golfing generation between the knock-kneed set-up of Arnold Palmer and the orthodox - perhaps somewhat robotic - square-stanced style ushered in by Nick Faldo and continued by Tiger Woods and now used by almost every player today.

and Amazon listings for a Ping Anser in your region

It all begins of course with the grip. Luckily for Seve, he was born with a defect that made his right arm four inches lower than his left, and so it was easy to adopt the conventional grip for most right-handers, the only change being the extension of his right index finger down the shaft.

From there, the action was a simple one: swing the arms and don't involve the wrists.

Any keen golfer watching Seve Ballesteros would have noticed that his hands were always slightly forward, allied to his weight mostly on his left side. This was designed to promote a "forward press" movement in order to deliver the ball down the intended line more consistently.

His trademark as a putter was having the toe of the putter slightly up, purely for a more natural, lowered address position, much like for his full swing. In addition to this, Seve played to his strengths and used his visual flair by setting up with a slightly open stance to help aim the putter while looking more down the line at the same time. An open stance like this is something you may want to try if you are having trouble seeing the line. It worked for Seve, Jack Nicklaus and countless others.

For most of his career Seve Ballesteros used the original Ping Anser putter. For him it was the unique sound that putts make off this model with the sound slot made off the face gave him the feel he wanted. For Seve feel was everything. Technique was purely secondary, and for putting that's almost certainly the right set of priorities.

There was not a whole lot of science to Seve's method. He made sure he struck the ball at the low point of the stroke and hit the sweetspot of the putter. That's all - the rest, and Seve's genius, lay in the supreme feel and creativity he had. 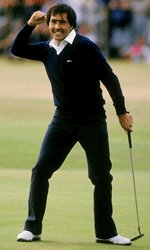 If you use an old style Ping Anser you may not realise that the sweetspot is not in the centre of the face, but nearer where the hosel joins the top line (you can tell this either by the sound of the strike or tapping a golf ball along the face until the putter stays balanced, the face neither deviating open or closed).

Another key secret that Seve used to make short putting simpler was turning the toe of the putter in on left-to-right putts and the heel in for right-to-left. By doing this he was reducing the break of the putt as well as making it break later; almost dictating the path the ball would take.

A young Bernhard Langer benefited from Seve's knowledge of putting and this helped him through one of his first legendary bouts of the yips. At the 1980 European Open at Sunningdale, Seve the reigning British Open Champion, approached Langer, having watched him putt from afar. Seve asked to have a go with his putter.

He knew after just a couple of putts that Langer's putter needed to be heavier and have a little more loft, thus providing better feel and a truer roll without changing anything in the technique.

After an immediate trip to the pro shop, Langer went on to finish third that week and won his first tour event two weeks later.