"The Art of Putting" - Stan Utley
An unbiased review

The Art of Putting is my top tip if you want a simple-to-follow, but effective putting book. It had such a positive effect that I took 26 putts in the first round I played after reading it.

If you're looking for a step by step book to de-mystify the putting game, this is the one to go for. Starting with the grip and covering every aspect of putting this book has great advice to take you to the next level with your putting.

Who is Stan Utley 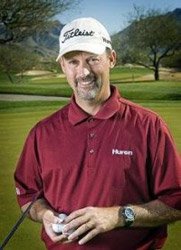 By his own admission, Stan Utley is a journeyman pro on the PGA Tour but he has a sizzling short game.

He won one main tour event in 1989 and survived on the PGA and Web.com / Kornferry Tours on the strength of his ability to take far fewer shots on and around the green than most other players.

Utley turned his attention to coaching the short game, as he approached Senior Tour age (he turned 50 in 2012), and has taught Jay Haas, Peter Jacobsen, Darren Clarke and Paul McGinley.

What's in the book? A chapter-by-chapter analysis

Utley starts The Art of Putting with a quick introduction to the playing and teaching he's done over the years, and whets your appetite to get stuck into some serious stroke surgery. It's easy to read and had me hooked from the start!

Most people, Utley suggests, hold the putter across the bottom of their palms, which deadens their feel and puts their arms out of alignment. He describes in great detail a grip which puts the pressure points of the grip in the tips of the fingers and the lifelines of the hands.

Changing this in the right hand particularly allows you to align your elbows far more easily and gives you the feeling that your right hand is directly behind the shaft. The first day I did this I took 26 putts instead of my then usual 31 or 32, so I'm a fan to put it mildly.

Choosing a putter that suits your height is extremely important to the Art of Putting well. Stan says the following:

Chapter 4 - The Art of Putting - precisely what is the goal of the stroke?

Utley wants you to swing the putter around the axis of your spine, which means the putter naturally swings inside the line the backswing and the throughswing. The face of the putter, in staying square to the line of the swing, opens and closes in relation to the ball to target line.

Chapter 5 - The Psychology of putting

No revelations here - The Art of Putting suggests a process based focus rather than getting too concerned whether the ball goes in the hole. In terms of what you should do when you're preparing to putt, Utley suggests a simple mantra of See the putt, Feel the putt, then let it go.

Are you right or left eye dominant? What difference does this make to your putting? These and many other useful tips here.

Although less of a "how to" section, this chapter focuses on some of the top pros Utley's worked with over the years. It's interesting to know that some of these great players had the same problems as us mere mortals! Darren Clarke gripped it too much in the palms for example and Jay Haas used to tilt his shoulders rather than turn them.

Chapter 8 - Putting Drills - how to practise

Some excellent drills which match Stan's technique and view of the putting stroke. You can practise these drills either at home or on a practice green.

This is a great chapter to read just before you head to the course, to remind you of exactly what you're trying to achieve. All the fundamentals and common faults and fixes summarized in bullet point format.

Other books to consider:

One of the greatest putters of all time opens his mind. If you've ever wanted to know exactly how a great putter thinks, this is where you'll find out.

Fascinating on the research on putting ... but watch out for the technique - the straight back, straight through method is not our favourite at Best-Putter.com.

Getting Up and Down - Tom Watson

Tom Watson never seemed to miss in his prime... ever. Although this book is about the whole of the short game, the 42 pages on putting are just about the best you can find anywhere. "Study hard, soon you will be the Master!"

Don't let the dated cover put you off this timeless masterpiece on the short game. Its instruction on putting in particular is revolutionary.

The Art of Putting - Stan Utley

The teachings of a short game master. Stan Utley is by his own admission a journeyman pro who built a successful career including a PGA tour win through short game prowess alone.

Click here for a full review of the book.