Can a putting track REALLY help you improve? 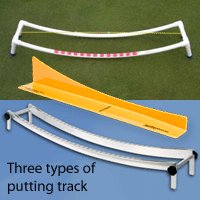 A putting track, according to the marketing blurb at least, can help you to sink tons more putts. But is this really the case?

I've used several different tracks to try to groove my stroke and I've learned a couple of tricks about how to get the best results which I'll share with you here.

The first thing you'll notice in the picture here is that not all designs of putting track are the same. Some are distinctly better than others. Read on for advice about which one works best for your stroke type.

Not in the US? Click here for eBay and Amazon listings for a Nike putter in your region

Tip 1: Only use a tilting or curved track

The world of putting finally seems to be getting over the idea, popularized by Dave Pelz, that putting strokes should be straight back and straight through with the face square to the target throughout.

Almost none of the top players putt that way. They have an arc in their stroke ... and so should you. That's why I believe you should only use a putting track that is either curved like the Momentus Inside Down the Line, or one that is made up of a set of straight rails that can be tilted to form an arc by making one set of legs longer than the other.

The reason I feel so strongly about this is that all golf strokes are formed by the club moving to some degree around the body. A square-to-square stroke, even though it seems like it might be uncomplicated, actually requires a good amount of manipulation to achieve, because the centre of your stroke is your body and you always stand to one side of the target line, never directly above it.

Tip 2: Practise your set up more than your stroke

Here's a question for you: What dictates the shape of your stroke? - The way you manipulate your hands and arms or the way you set up to the ball?

If you use a putting track for any length of time, you'll realise that the path your stroke takes is mainly dependent on your set up position and not your hand and arm movement.

Sure, you can deliberately pull the putter away in one direction or another when you're deliberately thinking about it, but do you want a stroke that you have to consciously direct?

I don't think so. What you really want is a putting stroke that flows in the right shape and direction because your set up makes it that way - it leaves you far less to worry about when you take the putter away from the ball. The kind of stroke that flows from the right set up will be far more consistent and more resistant to pressure, too.

Therefore, when you're working with the putting track, try all different body positions until you find the one that most often allows you to take the putter back in the direction you want and with the shape you want.

Try bending over more from the hips, or standing more upright, try raising or lowering your hands at address, try having your elbows varying distances from your torso. All of these changes will have an effect on the shape and direction of your stroke, and noticing what these changes achieve with feedback from the putting track (are you following the shape of the track naturally?). Working out which set up gives the most consistent stroke is what using a putting track is all about.

Tip 3: Practise until you can do it with your eyes closed

When you're practising with a putting track, there's one thing you must keep in mind - the goal is to be able to produce a consistent stroke when the track's no longer there. Becoming dependent on the track to guide your stroke will do you no good because all the meaningful putts you'll ever have will be made without the track.

This is a tip to for you if you use a guide track such as the Momentus trainer pictured here. This design requires you to stroke putts with the heel of the putter touching the plastic guide.

One problem you may run into if you use this style of putting track is that you apply too much via the putter to the track.

Then, when you step away, you find your putter path deviating too far to the inside of your intended line. The problem here is that you're putter is not merely resting on the track as you practise your stroke, it's PUSHING onto it. When the track is no longer there, your putter path is affected by the pressure you have become accustomed to exerting.

My final tip for you if you're using a putting track is simple. Make sure you remember that it's only your putting performance on the green that counts. Being the best carpet and track putter counts for nothing when you've got a scorecard in your hand.

Putting guru Dave Stockton has a principle which should put all this into perspective. He says that your routine is more important than your stroke.

The two main goals of your routine are, so Stockton claims are to focus your mind on the line and speed you're looking to achieve, anything which distracts you away from these two elements hurts your putting.

Putting tracks give you no feedback on either speed or the line of your putts are following, so whilst they are excellent tools for helping us to understand how a stroke of a certain shape feels, the stroke is always less important than the line and the speed of our putts.

I would rather be a master at seeing and judging line and speed than someone who has a beautiful stroke, but stroke putts clumsily and without due attention to the line that they are following.

... and to read about the Momentus Inside Down the Line training aid, click here