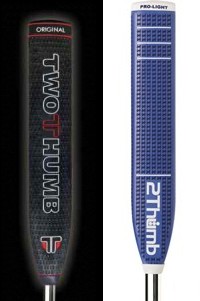 The 2 Thumb Putter Grip is a double thickness grip which allows you to hold the putter with both hands side-by-side rather than having to have one above the other as with all other conventional putter grips.

I certainly found the feeling of using the 2 Thumb Putter Grip strange to begin with. It's more than just a different type of grip - it's a different style of putting. Maybe that's what you're after... maybe not.

When you first pick up a putter with this kind of grip on it you might well not know how to hold the thing! It's like suddenly finding out that down is up and up is down.

Not in the US? Click here for eBay listings for a 2 Thumb Putter grip in your region

Even though it didn't me too long to find a way to hold the putter, I found gripping it to be a little uncomfortable - you have to overlap or interlace your fingers round the back of the grip and this takes some getting used to. Putting comfort aside, however, I felt as though my results with the grip were good right from the first ball I hit. I know I'd want some time to get used to it before playing with it in a pressure situation, but that's just a question of practice.

The two thumb grip is designed to allow you to adopt a technically "correct" address position naturally. One of the keys to good putting - according to many coaches (Stan Utley is one example) is to have the line of your shoulders and elbows lining up parallel to the ball to target line.

Lots of players of all levels find this tough if your grip has one hand lower than the other. By having your thumbs together, it was considerably easier to align your elbows much more naturally. The grip also made it virtually automatic to have your shoulders level and correctly aligned at address - another big plus.

Does the 2 Thumb Putter Grip work?

There's no doubt that the grip solves these issues of set up and alignment. Every player I've seen addressing the ball with the two thumb has their elbows better aligned and their shoulders level.

I was pleasantly surprised by how easy it was to putt relatively well with the 2 Thumb Putter Grip straight off. Even though it felt strange in my hands, the stroke seemed extremely natural.

Much to my surprise I holed a good number of the first putts I hit with the grip.

Speed control is one factor which could be a challenge to get right with this grip. With both hands so close together, it seemed much more difficult to me to judge the distance. I've noticed a good number of the people I've played with who are using the Two Thumb Grip have struggled to get the ball up to the hole on a consistent basis, especially if the greens are slow.

This may only be a question of practice, and your ability to hole out consistently from short distances may be so much improved that you're willing to sacrifice some touch on the longer putts.

In that respect it's a similar compromise as those faced by users of the long putter - you're probably better with the short putts, and may be worse on the approach putts. I know for sure, however, that better short putting is an absolute must for lower scores!

If you do struggle a bit with the longer putts, it's worth bearing in mind that you can still separate your hands for long putts if that works better for you. For more information on the 2 Thumb Putter Grip, click here