Putter clones: How to spot a fake

Where are they made? 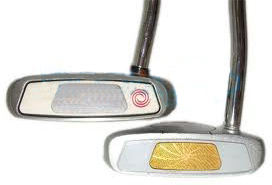 The vast majority of the putter clones available today are products of the Far East: Namely China, Vietnam and Thailand.

Because these counterfeiting capitals are also among the fastest developing golfing markets, it's no coincidence that you'll find knock-off golf clubs being made there in large numbers both for the local market and overseas.

Putters offer a wide-open window of opportunity for spin off enterprises to sponge from the successes of the top brands. Some make replica putters which are very similar to the genuine article, but have a different name stamped on the bottom. Other companies go further and make fake or counterfeit putters which carry the name of a genuine manufacturer but aren't made by the real company.

Even putters made to resemble recognised brands, but marked with a different name are generally illegal because they breach patents protecting the design of the putter. Scotty Cameron and Odyssey are the most commonly forged putters.

Is it illegal to buy one?

Buying a putter clone or replica putter is not technically illegal, whereas making and selling most certainly one is. In the eyes of the law of most countries purchasing a clone  will make the victim of the crime of counterfeiting.

Coming into possession of a clone means you have bought a product that is being sold as genuine without being so, but the crime is in making it and selling it, not buying.

Nevertheless, it is universally known that copycat companies cannot achieve the same quality as the real company whose putter you may think you've bought, so you'll almost inevitably end up with a substandard product.

How do I know that I've bought a fake?

The simplest way to notice putter clones is to hold the suspected fake or replica item alongside a putter which is confirmed to be the real deal, selling at full price in a legitimate pro shop. Obviously this can be difficult to do, so look very carefully at pictures online, especially if you're buying a used club on ebay, for example. That said, as the video here about Scotty Cameron fakes, determined counterfeiters are doing a very good job.

Bare in mind that it will be hard to obtain a refund if you're buying a new product off a dubious website, and even if the site did offer a refund guarantee, it may simply be too costly to be worthwhile if the site is based outside the country you live in.

Alternatively, you can simply be guided by the price tag. A heavily reduced, brand-new, top-of-the-range putter is very likely to be too good to be true.

Do fake putters make a difference?

If you're an average handicap player, the difference in performance between a putter made in a counterfeiting warehouse and the genuine article would probably be very difficult to spot.

You CAN certainly make putts with a putter clone! A good stroke combined with a pure strike are far more important for the results than the authenticity of your putter. </p>

Putter clones can sometimes be almost an exact copy of the original, but the catch is the materials that are used. Take the Odyssey insert putter clones (the world's most cloned putters) as an example. Cloning companies  caught onto the popularity of the two ball design in the early 2000s and since then have produced not just fake 2 Ball putters, but also an array of spin-off copies some with three balls and others with smaller disc-like aiming guides.

The clones and most of the replicas breach the patent Odyssey have for their design, even if the bottom of the putter is stamped with a different name. </p>

"Big deal", you may think, but if you look more closely you'll find a hitch that only true connoisseurs would pick up on. The soft "White Hot", "Ice Hot" or subsequent inserts used on this range of putters are a major part of these putters' appeal and they cannot easily be replicated.

What you get in an Odyssey clone is a cheap plastic substitute insert that changes the strike off the face, and undermines the feel and success of the putter.

Therefore, if you're considering buying an insert putter in particular, you should steer clear of anything but the genuine item if you want the fabulous feel that the original insert materials give you.

Cast or milled putters, on the other hand, are much easier to clone and most of us would be hard pressed to tell the difference between these putter clones and the genuine article, even though the technology used to produce the putter clones will not be anywhere near the same standard.

You'll also see plenty of situations where genuine putter manufacturers are producing copies and adaptations of older putter designs, such as the once revolutionary Ping Anser style.

Isn't this illegal too? The answer, however, is no. As the 20 year patent term on the Anser heel and toe weighted design has now long elapsed.

Where am I most likely to find putter clones for sale?

With up to 2 million counterfeit golf clubs made every year, it is easy enough to pick one up, either intentionally or by accident. Remember, though, that the bulk of them are produced in China, Thailand and Vietnam, so the place you're likely to find them if you live elsewhere is online.

You'll mainly find putter clones being sold anywhere that the option to 'try before you buy' is not available to you. This is because inconsistency in performance and durability of these clubs would probably put you off.

Another tell-tale sign of an outlet selling putter clones - either online or not - is the lack of a guarantee which means you have no chance of sending it back to the retailer if you're not satisfied.