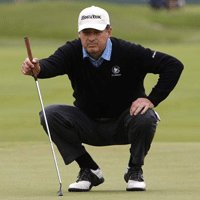 Loren Roberts is almost the definition of a great putter. With four major championship victories on the Champions Tour, the "boss of the moss" has maintained his putting touch well into the latter part of his career.

Renowned for his pure stroke and superb touch, Roberts is many people's model on the greens, particularly those who follow the straight-back-straight-through putting technique. His set up with the hands directly below the shoulders is perfect for this style of putting, and whether you are looking to putt in this way or not, standing tall and having very straight legs is considered to be ideal for putting as it gives your arms plenty of room to swing the putter and your eyes a high position which is best to view the putt clearly.

Roberts is unusual insofar as - to our knowledge - he has only used one putter throughout his playing career. It's a fairly standard putter - the Cobra Greg Norman "Zing" shape putter, and what's also unusual is that Loren Roberts is the only PGA tour player we know of who has used this model for any length of time. Cobra no longer make putters, but there are a number of used models usually for sale on eBay.

Another thing that is particular to Loren Roberts is the heavy weight of the putter he uses. In fact he practises with a putter that is even heavier than his regular putter. "I believe you can control a heavy putter far better than you can a light putter. Even on fast greens, almost the heavier the putter the better," is Loren Roberts' advice.

Fact file:-
Date of birth: June 24, 1955.
Claims to putting fame: Made an 18-hole playoff for the 1994 US Open with Colin Montgomerie and eventual winner Ernie Els at Oakmont - home to some of the fastest putting surfaces in the world.
Putter used: Cobra Greg Norman

What we can learn from Loren Roberts' putting ?

Roberts says that you must always remember that the golf swing and the putting stroke are two different actions that stem from the same family. The elements that bring them together are 1) the necessity to control the speed of the clubhead; and 2) the visualisation of the shot itself and what you want the ball to do. Roberts' philosophy therefore is that control is the key to putting."

One key factor that you will see in Roberts' three practice putting strokes is the way his arms hang loose and free to swing. He has done this ever since he was given a tip in the early days of his career to practice putting with a heavier putter than his own. The 36.5 inch shaft and heavy-headed design meant that the putter would swing with less effort from the player - almost like a grandfather clock. However, while he may have practiced with a heavier putter, he used a lighter-than-standard putter throughout his career.

Simplicity is the hallmark of Loren Roberts' putting. He has a very simple, no-nonsense routine, which is completely consistent: He has a customary two looks at the hole when over the ball and pulls the trigger without undue delay.

One technical aspect you can learn from Roberts is the way he keeps the butt of the grip pointing at his belt buckle throughout the stroke to help promote the natural swinging motion that helps him get that control he believes is so important.

Pace putting is something that you could improve by watching Loren Roberts. A drill that he is an exponent of for this part of putting is the "one arm drill." Here's how you should do it:

1) Take your normal address position behind the ball and get comfortable - as if you are just about to take the putter back.

2) Place your lead hand into your trouser pocket (the left hand for the right-handed player and vice versa) while maintaining your normal address position.

3) Hit a series of putts from around 25-30 feet from the hole. This will help you to "swing the putter like you should" according to Roberts. The idea behind the drill is that the right hand gives you feel and the left hand gives your stroke shape. Tiger Woods is also a great exponent of this right handed feel drill and he starts each of his pre-game warm ups with right hand only putting to gauge the speed of that day's greens.